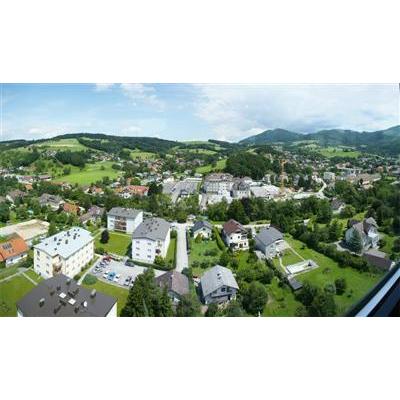 With its landmark test tower rising 50 metres high, the new TIC (Technology and Innovation Center) opened by Wittur GmbH in Scheibbs, Austria, is a visible symbol of the innovative and future-oriented approach taken by the entire Wittur Group.
Frames, door operators, safety components and drives are to be developed at the TIC to expand Wittur’s own product range. In addition, joint development projects with customers will benefit from Wittur’s long experience and know-how.
The TIC will enable Wittur GmbH to fulfil its mission and provide the Wittur Group with an outstanding level of R&D expertise for the development of innovative components.
A day-long official opening ceremony took place on July 11th, 2009, attended by many of those who made the TIC possible. They included representatives of the local authorities in Scheibbs and the Lower Austrian state authorities, Wittur Group customers and the entire staff of Wittur GmbH, along with their families who provided continuous support.
Mr. Andreas Zwerger, Managing Director of Wittur GmbH, welcomed the guests and introduced the speakers - Mr. Norbert Schleicher (Works Council), Mr. Ahmet Özcan (Staff Council), Mr. Johann Schragl (Mayor of Scheibbs), Mrs. Martina Gerersdorfer (Scheibbs District Commissioner) and Mr. Kurt Trnka (Vice President of the Lower Austrian Chamber of Commerce). Their speeches underscored the importance of investing in research and development in times of economic turmoil by creating a facility such as the TIC. Positive mention was also made of the decision to celebrate the opening together with all the staff and their families as thanks for their outstanding dedication to Wittur and their contribution to realising the TIC.
Mr. Stephan Rojahn, President of the Wittur Group and Mr. Wolfgang Sobotka, as Vice President of Lower Austria, subsequently stressed the importance of the TIC, both for the development and future-oriented growth of the Wittur Group and as a symbol of ongoing expansion.
After the ribbon had been officially cut, the TIC was opened to all the guests. They were able to visit the test facility, watch a video of a lift test and then take the lift to the top of the tower to admire the breathtaking view - it was almost like flying high above the town of Scheibbs.
An afternoon of music and festivities followed, with a play corner for children of all ages and traditional Austrian music for everyone to enjoy until late in the evening.